We just had our photo taken as part of the J. Shimon & J. Lindemann's Real Photo Postcard Survey Projectin the tabernacle of their Manitowoc studio. This is what we saw from the other side of the lens, Julie and Johny at work. Since we have been considering what it is to be linked to a historical continuum, their project, in conjunction with The Portrait Society Gallery in Milwaukee, speaks to connecting to" an ongoing cultural effort, an evolving tradition, to record the individual." 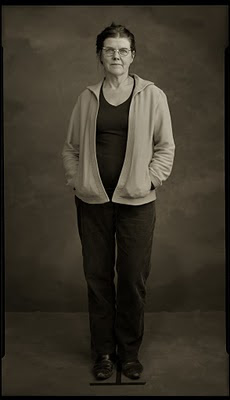 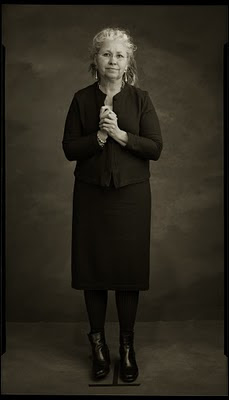 photo of and by J. Shimon & J. Lindemann
Posted by Barbara Ciurej at 3:29 PM 1 comment:

Working and Waiting and Inspiring 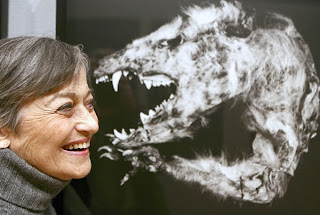 Barbara Crane photo by Charles Osgood, Chicago Tribune / October 12, 2009
Finally, photographer Barbara Crane, who has been working prodigiously for 6o years, is getting due recognition. Barbara Crane: Challenging Vision curated by Ken Burkhart is at the Chicago Cultural Center until January 10, 2010. Director of Visual Arts for the Chicago Department of Cultural Affairs Gregory Knight writes, "From the beginning, she has forged her own path of photographic invention, often as the lone woman in a male dominated world." 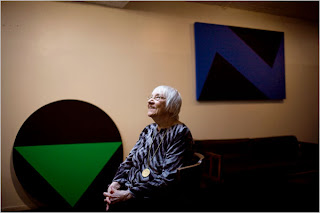 Carmen Herrera photo by Ted Heisler/TheNew York Times
Meanwhile, the Cuban-born artist Carmen Herrera who after six decades of very private painting, sold her first artwork five years ago at the the age of 89, and is being called the hot new thing in painting. "I do it because I have to do it: it's a compulsion, that also gives me pleasure," she said of painting… "I thought fame was a very vulgar thing. So I just worked and waited." Recognition came after her husband, Jesse's death in 2000. "Everybody says Jesse must have orchestrated this from above," Ms. Herrera said shaking her head. "Yeah right, Jesse on a cloud." She added: "I worked really hard. Maybe it was me."
We know it was.
Posted by Barbara Ciurej at 4:15 PM No comments: